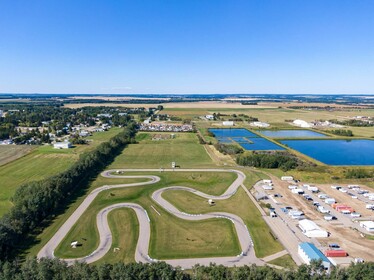 A Hidden Gem within the Community

Most people outside the community do not realize that Warburg is the site of a competitive karting track, observed to be second in its class in North America!

In 1982 Noel Dower Sr and existing club president Nigel Mullen oversaw construction of the first track in Warburg. This is where Kevin Dowler and Daryl Harr raced as a teenagers, with both drivers eventually going on to race professionally in the Cascar Western Series, winning a combined 6 championships – 5 for Kevin and 1 for Daryl.

In 2009 a deal was signed with the Village of Warburg to purchase the land adjacent to the south border of the existing track. Despite the exceptionally wet summer of 2010, with very many hours of volunteer by club members, the construction of the new 1.1km track was completed in 2010.

The EDKRA is a non profit organization entirely operated by volunteers who ensure a safe and enjoyable race day experience for the whole family. Typically the race season each year includes:

EDKRA welcomes all ages and skill levels and host free sessions throughout the season for people to get a taste of karting. Contact us (see below) for more information or to become involved.